Buzz about Viking “Reunion” is Just That: Buzz. 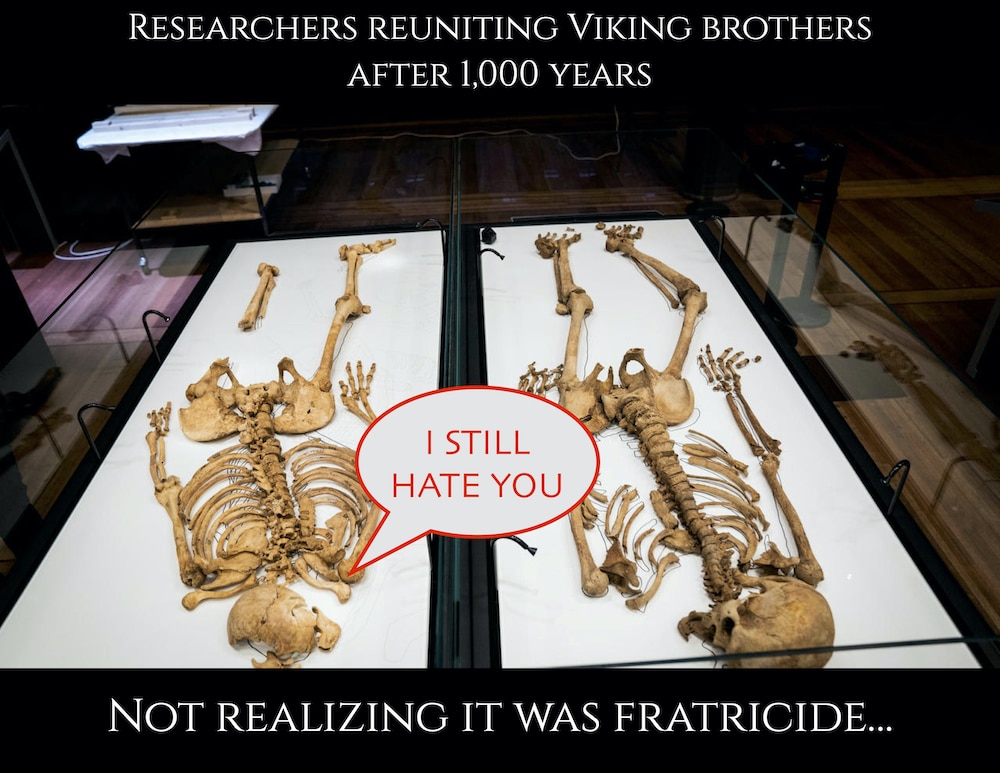 It is always difficult to tell what new findings in Viking studies will make the rounds in mainstream media. Some of the most significant and impactful studies on our understanding of the Viking Age never leave the academic journals in which they are published, while other far more meaningless stories leap into headlines. A recent report about two supposed Viking relatives reunited as skeletons in Denmark shows there is often little rhyme or reason for why one story makes the headlines and others do not.

The story in question centers around a recent genetic test that revealed two skeletons from the Viking Age, one discovered in England and one in Denmark, belonged to the same family. One of the men died in his 20’s as part of a presumed massacre. Archeologists discovered his skeleton in 2008 at St John’s College at the University of Oxford as part of a supposed mass grave. The other appears to have died in Denmark in his 50’s in less violent circumstances.

The finding, while intriguing, offers little in the way of expanding our knowledge and understanding of population movements between Scandinavia and the British Isles in the late Viking Age. And yet, several major news outlets have reported on the findings citing Dr. Rane Willerslev, director of the National Museum of Denmark, as saying, “We thought that Vikings had left Denmark to live in Britain, but we were not certain. Now we had the evidence that they were kin.” Let us hope Dr. Willerslev’s statement was taken out of context.

The reality is that overwhelming evidence already exists to support the current consensus that significant population movements occurred between Denmark and the British Isles during the Viking Age, including modern DNA surveys, place names, and a wide breadth of historical and archeological findings.

What is more, the precise relationship between the two skeletons is unknown. The researchers admit that they have no idea if the two men were grandfather and grandson, uncle and nephew, or second cousins. They cannot even tell if they were alive in the same period or lived within overlapping generations. If the finding that the two men were “relatives” were our only basis for confirming Danes migrated into the British Isles at the end of the 10th and beginning of the 11th century, it would be dubious evidence at best.

All this is not to say the findings of the mass grave in Oxford are without interest or impact on our understanding of the Viking Age. That researchers discovered a mass grave of Danes in England promises all manner of potential findings on its own. But why does finding out that one of the skeletons happened to be loosely related to another skeleton in Denmark make it more newsworthy? We already knew the men in the mass grave in England were Danes. We’ve learned nothing new.

I understand the folks working at the National Museum of Denmark and their excitement. It is one more fun fact to add to the skeletons’ plaque to illustrate the broad impact of Scandinavian expansion into the British Isles. In no way do I want to minimize the importance of the finding to them. However, in terms of substance and newsworthiness, I find the whole story light on substance. It’s a fluff piece. Perhaps more about the two men will come to light in the future, and we may yet learn something new and profound from them. Until then, they remain a curiosity more than anything.