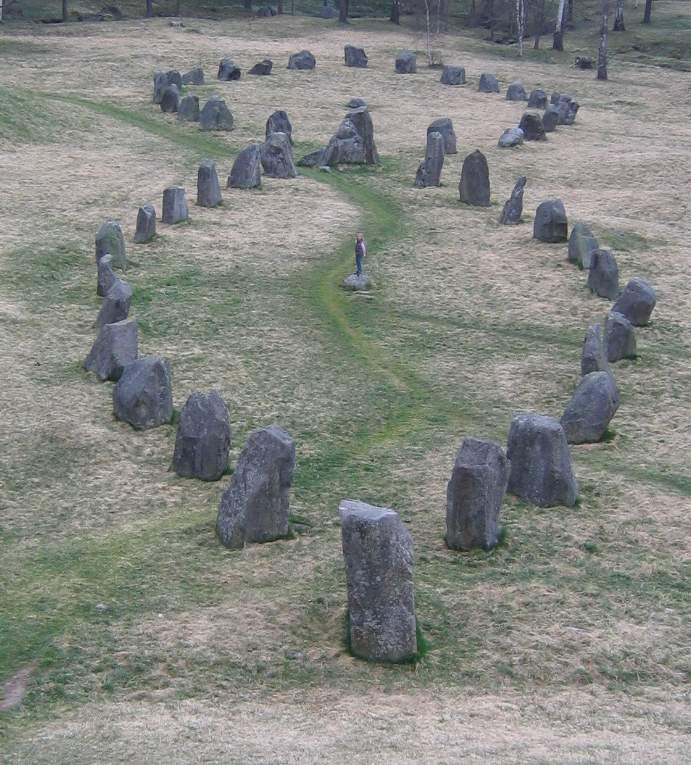 An article recently published in The Journal of Island and Coastal Archaeology by a group of researchers from Flinders University has proposed discovering two new ship settings at the Kalvestene grave field on the island of Hjarnø, Denmark. Researchers used medieval textual witness testimony of the gravesite by a man named Ole Worm to identify the new ship settings. The findings both affirm Ole Worm’s credibility as a historical source and opens the door to more potential finds at the site.

What is a ship setting?

A ship setting is a style of burial that was popular in the early Viking Age in Scandinavia. Rather than bury a ship in the ground, as became standard later on for the wealthiest individuals, the dead had the likenesses of ships outlined with rocks around their graves. The image below of the two largest stone ships at Anund’s barrow in Sweden illustrates the scope and size some ship settings attained in a dramatic way.

Ole Worm’s 17th-century drawing of The Kalvestene (which translates roughly to “calf stones”) grave field included representations of more than twenty stone settings. Curiously, archeologists have found fewer than a dozen, leading many to question Ole Worm’s testimony. However, the recent study successfully used the drawings to find two more settings, opening the door to the possibility that, hidden in the ground, several more remain. It is a delightful confirmation that Ole Worm is, for the most part, a reliable source and an exciting proposition for archeologists who will continue to hunt for additional stone settings not previously found at the site.

Erin Sebo, lead author of the study, wrote of the discovery: “Our survey identified two new raised areas that could in fact be ship settings that align with Worm’s drawings from 1650. One appears to be a typical ship setting and the second remains ambiguous, but it’s impossible to know without excavation and further survey.”

If you want to read more about the study, CLICK HERE.

In the study of the Vikings, nothing is for certain. Contemporary sources pose all manner of problems for modern historians, and their credibility is often in question. Therefore, the work of historians is primarily to evaluate textual sources for their credibility and cross-reference information with other contemporary sources to confirm the likelihood of any one source’s authenticity. In the case of Ole Worm, we have here confirmation that his drawings are, most likely, a close representation of the gravesite in his time. In my opinion, the discovery is a more significant win for historians than for archeologists, as we have here a confirmation of a historical source’s credibility in conjunction with the archeological discovery of new ship settings.