Viking Age Amulets May Have Represented Ritual Costumes, Not Gods and Heroes, A New Study Concludes 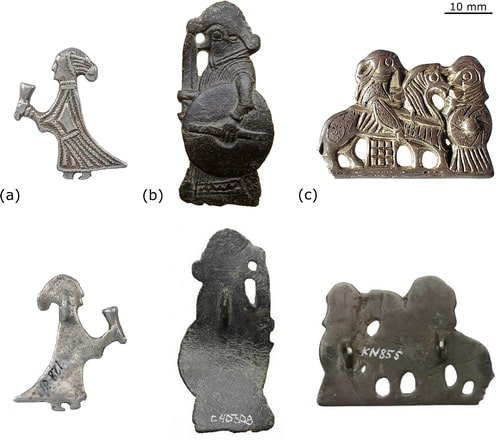 Denmark – A new study from Pieterjan Deckers, Sarah Croix & Soren Sindbæk released this month has proposed Viking Age amulets and figurines, once thought to have represented gods and heroes, instead express ritualistic costuming. The study authors analyzed various objects uncovered by archeologists in a Viking Age ceramics workshop found in the town of Ribe in Denmark.

As the study authors propose: “By highlighting iconographic and stylistic parallels with the tapestries of the Oseberg ship burial, we apply a novel perspective to the discussion of the armed woman motif and other Viking-Age figurative art. We argue that the common theme of the images is not the portrayal of heroic or mythological beings, but is instead ritual performance, in which women played a central role.”

While most of the amulets and figurines have not survived, the workshop in Ribe contained an assortment of molds that revealed the kinds of iconography produced there when examined with the help of advanced 3D scanners. Researchers discuss the iconography of a riderless steed, an armed woman, and a gripping man among the figures. All three share stylistic particularities that, when considered together, point to shared ritualistic use. The researchers’ conclusions are as follows:

“When viewed as an ensemble, the images from the Ribe moulds suggest themes of ritual rather than mythology. This conclusion is sustained by the stylistic and iconographic correspondence to depictions like the Oseberg tapestries. It is in this light that we should understand the apparent inversions in the images: the man gripping locks of his hair and the woman bearing weapons and armour, along with the full cast of miniature accoutrements: swords, shields, steeds and wagon wheels. As amulets and as part of female formal dress, these trappings harnessed the potency of ritual actions involving the transgression of social — especially gendered — norms. Depicting ‘ordinary men and women in extraordinary situations’, they highlight the central role of women in communal ritual and the importance of this prominence for female status and identity.

In remodelling inherited Nordic representations, the craftspeople of Ribe could draw inspiration from the heritage and visual culture of the Mediterranean past, which increasingly reached Northern Europe both in terms of the recycling of materials and in the re-appropriation of ideas borrowed from Classical myth, Christian legend and migration-period heroic tales. The urban networks of these emporia and the intersections between Scandinavia and the wider world of post-Roman Europe can be seen in the trade materials and adopted craft technologies arriving in Ribe. They were equally at the heart of the iconographic transformations revealed by the imagery of its amulet casting moulds.”

My suggestion for you when reading the study is to pay close attention to the analysis of the armed woman. The researchers discuss the use of a helmet with cheek guards that, as far as we know, was not a style of helmet in use during the production of the amulets. The discussion also draws parallels to—and suggests a connection with—Roman iconography that, if correct, opens a whole host of possibilities as to the production and ceremonial use of the amulets.

The most important implication of this research is the conclusion on the role of women in ritual. Though the study authors make no direct connections between their hypothesis and the broader discussion of Viking Age warrior women, their conclusions support the idea that other archeological finds claiming to have found warrior women—or shield maidens/Valkyre—may not be what they seem. In particular, the so-called warrior woman from Birka that made headlines a few years ago may have been buried in a ritual style of dress akin to that represented in these amulets rather than as an indication of her living profession. Such an assertion is supported by the fact that the woman’s bones showed no signs of trauma common to the bones of male warriors, indicating she likely did not live a warrior lifestyle despite being buried with weapons and armor.

I look forward to seeing how this new study withstands peer review and where it may steer the discussion on the role of women in ritual and warfare in the future.