Did Vikings Attack the Island of Noirmoutier in 799 A.D.? 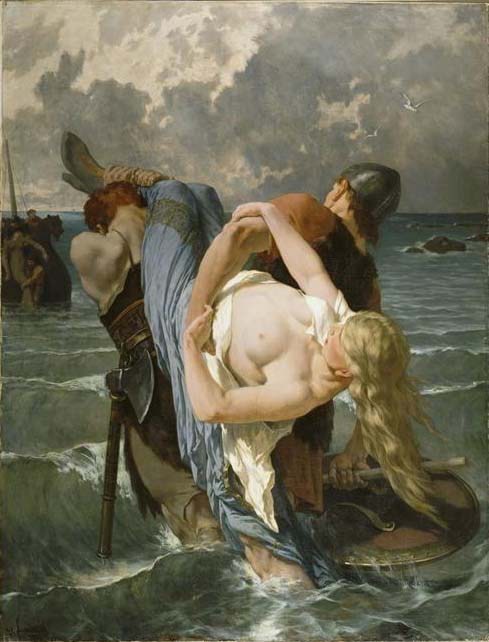 Most modern history books on the Vikings tell us that the monastery of St. Philbert on the island of Noirmoutier succumbed to an attack by Vikings in 799 A.D. To most, it is a fact. Recent scholarship has called into question whether the Vikings were to blame for the attack and whether the monastery of St. Philbert was the target. Did Vikings Attack the Island of Noirmoutier in 799 A.D.? Here I will discuss both sides of the debate and which side has the upper hand.

Why do we think the Vikings attacked Noirmoutier in 799?

What we know about the attack comes to us by a letter from the theologian Alcuin—who also wrote about the attack on Lindisfarne—to the bishop Arno of Salzburg. He described an attack by Paganae, or pagans, in the insulas oceani partibus Aquitaniae, or islands of Aquitaine. While the testimony proves light on details, historians have traditionally co-referenced Alcuin’s letter with concurrent mentions of Viking activity on the Western coast of France produced by the Carolingians.

The first mention appears in the Two Lives of Charlemagne by the biographer Rimbert. In or around 800, emperor Charlemagne encountered a fleet of Viking ships off the coast of Aquitaine. So says Rimbert, when they learned the emperor had taken up residence in the coastal village they had intended to raid, they turned tail and sailed away.

A second mention in the biographical Vita Karoli Magni by the biographer Einhart also places Charlemagne in Aquitaine in or around the year 800, emphasizing that part of the reason for the visit had to do with the fact that Northmen had infested the area (Nordmannicis infestum erat).

Two later documents further confirm that Vikings had carried out the attack and that the monastery of Noirmoutier had been a target. A letter by the abbot of St. Philbert in 819 complained of frequent raids, and a later account by the monk Ermentarius written in the 830s mentions the first raid, although the account gives few details.

Why Some Historians Now Question If Vikings Attacked Noirmoutier in 799.

The historian Simon Coupland first questioned whether Vikings or someone else had carried out the raid on Noirmoutier. He cited the monk Ermentarius’ testimony of a Moorish raid attempt, telling us that the Moors were active in the area at the time. Further, he cites another letter by Alcuin describing Muslims as paganae, denoting a tendency by our primary source to conflate the different groups of people raiding in and around Aquitaine at the turn of the century.

Some historians have seen enough cause to dismiss the 799 raid altogether, placing the first major Viking incursions into Western France ten to fifteen years later, consistent with our primary testimony from St. Philbert monks.

It is essential in the study of history to hold claims to scrutiny. The renewed scrutiny over whether Vikings attacked the island of Noirmoutier in 799 A.D. puts conventional wisdom to the test and reminds us that so little is certain in the study of the Viking Age. My opinion–and I take this position rather strongly in my own research–is that the attack was indeed carried out on Noirmoutier, ile D’Yeu, and ile de Rez in 799 A.D by Vikings. While the prospect of a Moorish raid intrigues me, the Carolingians placed far too much emphasis on the growing threat of the Vikings in too broad a breadth of concurrent sources for the opposite to have been true.

The raid on Noirmoutier also fits in well with the westward progression of Viking raids across the west. First, Lindisfarne in 793, Iona in 795, and St. Philbert in 799. Coupled with the repeated alarm-sounding by Charlemagne’s biographers of the looming Northman threat, I believe we have a solid case in favor of the Vikings.