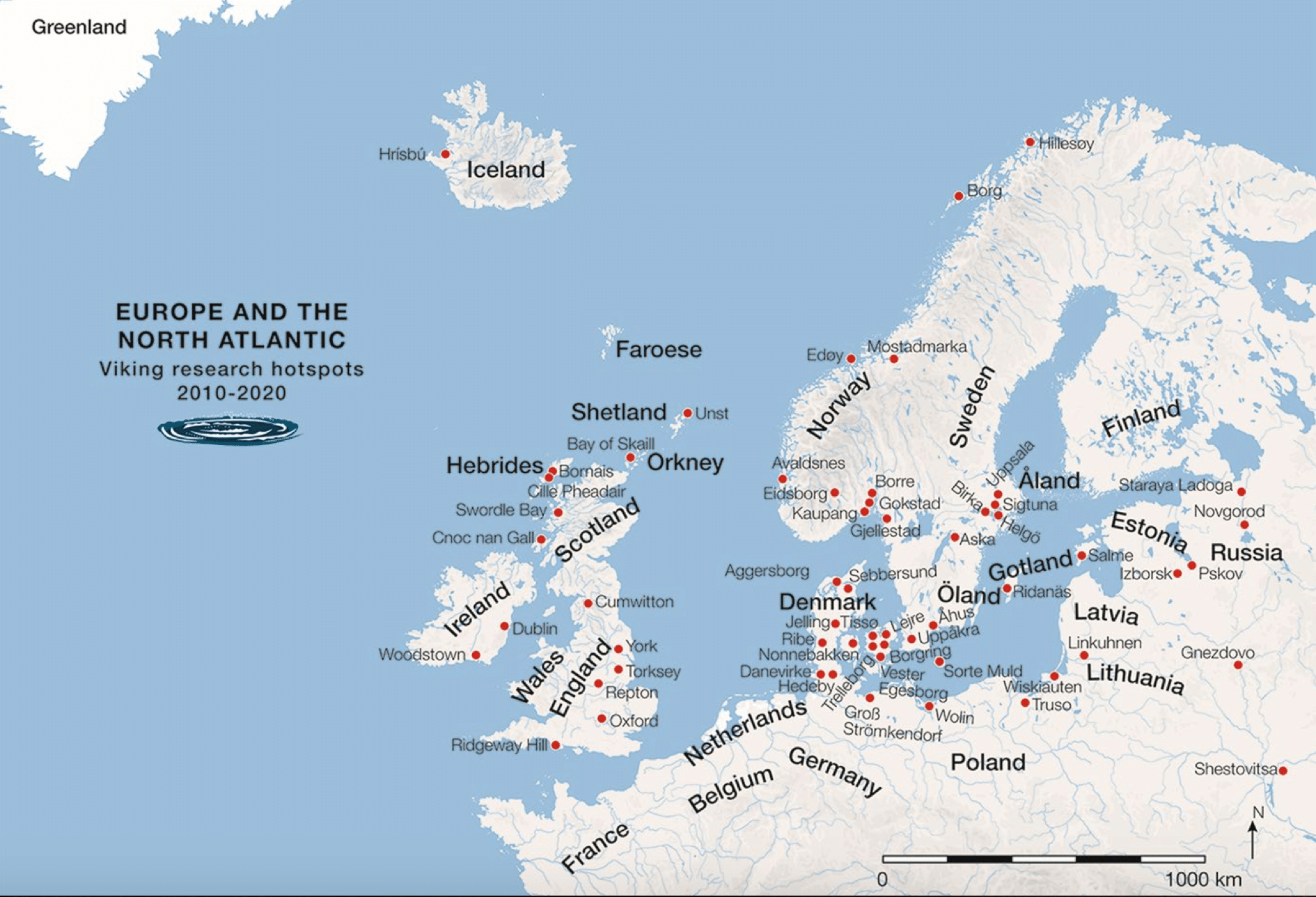 A new paper titled Crossing the Maelstrom: New Departures in Viking Archaeology published in the Journal of Archaeological Research has compiled the latest trends and recent finds in Viking Age research. The meta-study, compiled by Julie Lund and Soren Sindbæk, seeks to identify and overview trends in Viking Age research from the past ten years with an emphasis on archeology. Key to the paper’s central proposition is the identification of research “hot spots” where new discoveries and cross-disciplinary approaches are changing our understanding of the Viking Age. While not an exhaustive summary of all the things going on in Viking Age research, the paper summarizes the main themes that have marked the most exciting and impactful developments in the past decade.

Below is an excerpt of the paper with a link to read it in its entirety:

This paper reviews the achievements and challenges of archaeological research on Viking Age northern Europe and explores potential avenues for future research. We identify the reemergence of comparative and cross-cultural perspectives along with a turn toward studying mobility and maritime expansion, fueled by the introduction of biomolecular and isotopic data. The study of identity has seen a shift from a focus on collective beliefs and ritual to issues of personal identity and presentation, with a corresponding shift in attention to individual burials and the “animated objects.” Network ontologies have brought new perspectives on the emergence of sea trade and urban nodes and to the significance of outfield production and resources. Field archaeology has seen an emphasis on elite manors, feasting halls, and monuments, as well as military sites and thing assembly places, using new data from remote sensing, geophysical surveys, geoarchaeology, and metal detectors. Concerns over cur- rent climate change have placed the study of environment as a key priority, in particular in the ecologically vulnerable North Atlantic settlements. Discussing future directions, we call for alignment between societal/economic and individual/cultural perspectives, and for more ethically grounded research. We point to diaspora theory and intersectionality as frameworks with the potential to integrate genomics, identity, and society, and to ecology as a framework for integrating landscape, mobility, and political power.

Whether we think in terms of exchange and mobility, gender, violence, migration, political evolution, ethnicity, or cosmology, the Viking Age is a focus of recent debates in archaeology. Today, studies of this period are equally invigorated by a range of new conceptual explorations as well as scientific approaches. Viking Age research also attracts attention as a globally known topic in popular history and is claimed as a historical heritage by diverse groups—from nationalists to internationalists, capitalists to environmentalists, atheists to neo-pagans. Yet, this reception serves as much to distort recognition of a period that holds genuine importance as a transformative historical trajectory.

The cultural and political transformation of northern Iron Age societies in the centuries following the dissolution of the Roman Empire along with the consequences of maritime expansion following the widespread adoption of sailing vessels make the Viking Age a lynchpin of developments across much of northern Europe. From the first documented maritime raids and explorations in the North Sea and on the Baltic shores shortly before AD 800, seafaring Scandinavian armies were a prime political concern in western Europe by the mid-ninth century. The following century saw Scandinavian communities settle and maintain trading networks that stretched from England, Ireland, and Atlantic Scotland to Normandy and European Russia, along with settlements in Atlantic Scotland, Iceland, and the Faroe Islands. This process culminated in the establishment of colonies in Greenland and ventures into Newfoundland shortly before AD 1000. Meanwhile, societies in Scandinavia experienced profound changes, including the creation of larger and more powerful kingdoms and the adoption of Christianity, especially from the mid-10th century onward. While the military and political roles of Scandinavians waned after the mid-11th century, Scandinavian (or Norse) diasporas maintained a strong cultural presence in coastal areas into the high Middle Ages, and the Viking Age remained a cultural memory expressed by sources such as the Icelandic sagas and Skaldic poetry.

This paper explores changes during the last decade in the archaeological analyses of Scandinavia and the wider Viking world during the Viking Age (c. AD 750/800–1050). Our aim is to review trends and tendencies, not to make an exhaustive list of research on the period. Viking Age archaeology refers to Scandinavia, parts of northern Germany, and the North Atlantic islands, including Iceland and Greenland, as well as to diasporas in western Europe, Ireland, the British Isles, and even as far west as Newfoundland. Furthermore, the activities of settlers, traders, and travelers of Scandinavian origin have been studied in Polish, Finnish, Baltic, and Russian areas as part of Viking Age archaeology (Fig. 1). In this paper, we emphasize developments and challenges in Scandinavia, with the ambition to also cover the main achievements relating to diasporas in the west and east. While the study of the Viking world is a highly interdisciplinary field, the main focus here is on archaeology. Achievements within philology (i.e., Old Norse studies), place name studies, history, and history of religion—subjects that mainly refer to written sources—thus mostly remain beyond the scope of the present paper.

In research on the Viking Age, as in popular perception of the period, one can identify two competing views as to what defines the subject of interest. One may see the Viking Age as a pattern of trade, diaspora, and raiding—activities in which society engaged with the sea and the wider world in new, transformative ways. The other view identifies its focus as Old Norse culture, with pagan world-views and mentality as the point of departure. While these two views are not mutually exclusive, they tend to divide research interests and communities with little cross-referencing. We argue that a lack of integration between these two largely tacit strains of research undermines the effort of the first to identify motivations and agency and limits the potential of the second to engage with social organization. We also notice that the transformation of interdisciplinary inherent in these developments aligns archaeologists increasingly with biology, chemistry, or geology and decreases research integration with philology, history, and social sciences.

In the following, we examine some themes that have been explored within the last decade. In response, we call for changes toward more ethical research frame- works: first, focus on an alignment between societal/economic and individual/cultural perspectives, with diaspora theory, personhood, and other post-humanistic perspectives as frameworks with the potential to integrate genomics, identity, and society; and secondly, an environmental perspective that integrates landscape, mobility, and political power with a growing attention to ecology, environmental change, and societal resilience.