Did the Vikings Wear Makeup? 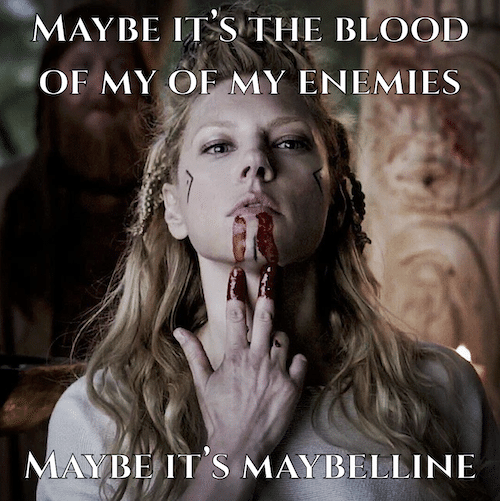 “Dear C.J., When I was little, my family stayed at a warrior reenactment camp, and one of the sections of the camp was a family who went ‘a-Viking. The woman was talking to me about her makeup. At the time, there was only discovered a brief mention that a woman or women had on what we today would call makeup. As a historian, she had to infer the rest to do this role-playing/reenactment. It would be cool to read about makeup and decorative flourishes worn and revered by people of that time.” – Rachel from Facebook.

Where it concerns what we know about Viking Age Scandinavian personal styles and decorations, we can only speak with a relative amount of certainty to those things which have come up in the archeological record. Hard, durable items made of metal—such as brooches, necklaces, hairpins, and other personal items—survive the test of time far better than soft, organic materials. Makeup falls under the latter category. To complicate matters, the Vikings did not have an advanced writing system and are silent in the historical record. If all we had was evidence the Vikings left behind, we would have little in the way of evidence to answer the question of whether the Vikings wore makeup or not.

Fret not. Extrinsic evidence does exist, albeit peripherally.

To answer whether the Vikings wore makeup, we must first explore the broader topic of personal hygiene among Scandinavians of the time. In general terms, we know hygiene played an important role in the daily life of Viking Age Scandinavians; so much so that various sagas allude to a bathing day, which stands in stark contrast to the Christian cultures of the West at the time (an anonymous medieval cleric once wrote ‘the smellier we are, the holier we are’). Christian chroniclers in close contact with the Danes in England also allude to their cleanliness practices. John of Wallingford, prior to Saint Fridswise, expressed discontentment in his writings about how the Danes combed their hair, bathed every Saturday, and regularly changed their clothes.

On the other side of the European continent, the Arab chronicler Ibn Fadlan, who met the Rus (Swedish Vikings) on the Volga river, made a variety of interesting albeit odd observations about their hygiene habits:

“Every day they must wash their faces and heads and this they do in the dirtiest and filthiest fashion possible: to wit, every morning a girl servant brings a great basin of water; she offers this to her master and he washes his hands and face and his hair — he washes it and combs it out with a comb in the water; then he blows his nose and spits into the basin. When he has finished, the servant carries the basin to the next person, who does likewise. She carries the basin thus to all the household in turn, and each blows his nose, spits, and washes his face and hair in it.”

Historians generally discount the testimony at least in part due to the apparent negative bias infused by the author. However, the account does show that even on a long voyage so far from home, the Vikings still practiced some form of self-care and grooming.

Here is where Ibn Fadlan’s account gets interesting: he mentions men wearing eye makeup to make themselves appear more fearsome. If left alone, the detail might not inform us of much, but as luck would have it, it accompanies another element. Ibn Fadlan claimed they also wore blue tattoos. The topic of tattoos is controversial because, like makeup, skin does not preserve well in the archeological record. However, another chronicle from a wholly separate time, place, and culture confirms the observation. The Annals of Fulda describe Viking warriors who launched an invasion attempt on Aachen as having tattoos from head to toe.

Among the items uncovered in the considerable breadth of ship burials across Scandinavia and Western Europe, archeologists have found numerous household items we would recognize today but might not think of as ancient inventions: scissors, tweezers, brass washbowls, combs, ear spoons (not quite as comfortable as a Q-tip), among other personal grooming tools. In fact, the assortment of personal grooming items lends to the idea that Viking Age Scandinavians spent a great deal of time grooming and decorating themselves.

The Swedish National Museum’s collection has some of the more intriguing artifacts regarding the makeup question. The “grooming kit,” a collection of personal grooming items, includes a mortar that, with testing, showed a residue whose contents point to one thing: makeup.

While we cannot say with certainty that the use of makeup was widespread among Viking Age Scandinavians, we do have some evidence to suggest the practice existed among at least a portion of the population. As with most questions in regards to the Viking Age, we have here a maybe-probably-could-have-been answer. I think it was wise of the woman in the reenactment group to describe her use of makeup with caution. Both historical and archeological evidence is light at best, making for a somewhat anachronistic inclusion as part of her costume.