What Caused the Viking Age? 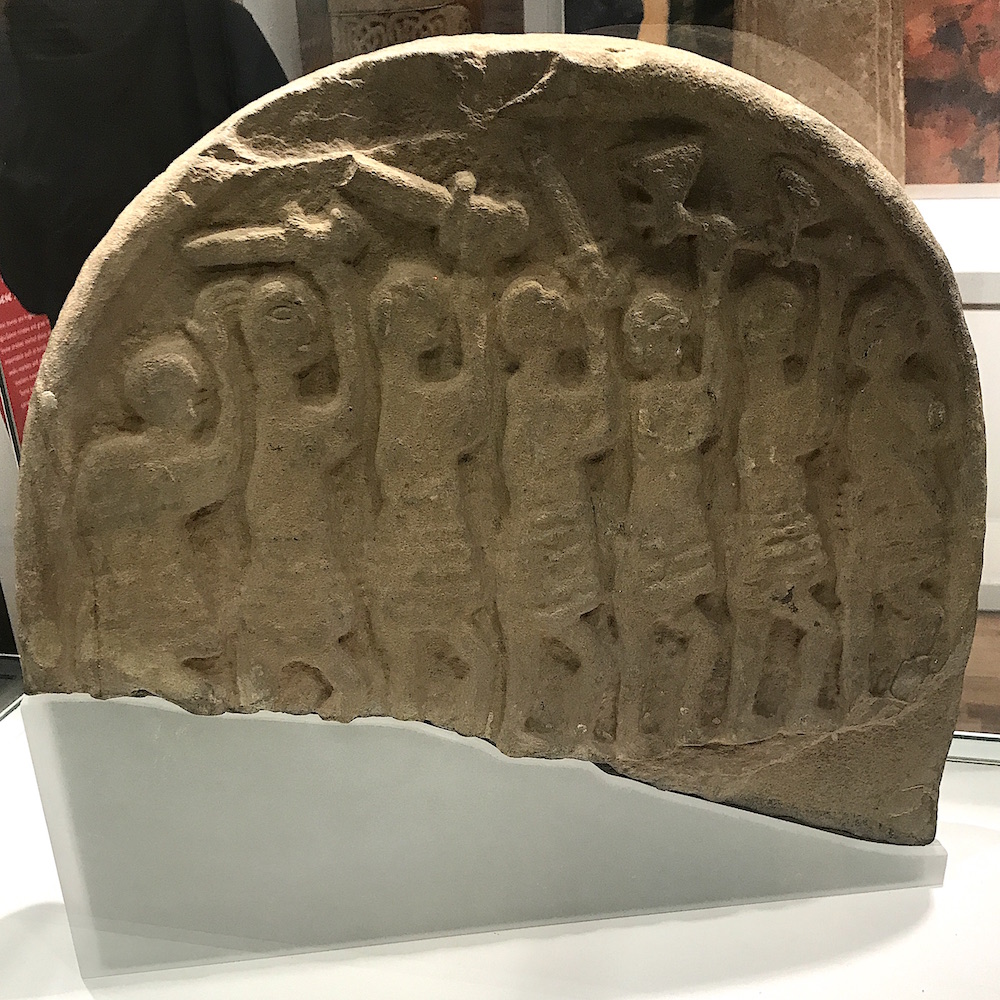 On June 8, 793 A.D., the world of Christendom changed forever. A fleet of mysterious ships appeared off the coast of Northumbria and took aim at the island monastery of Lindisfarne. The Anglo-Saxon Chronicle records:  “In this year terrible portents appeared over Northumbria, and miserably frightened the inhabitants: these were exceptional flashes of lightning, and fiery dragons were seen flying in the air. A great famine soon followed these signs; a little after that in the same year on 8 [June] the harrying of the heathen miserably destroyed God’s church in Lindisfarne by rapine and slaughter.”

In The Two Lives of Charlemagne, by Notker the Stammerer, the emperor of the Carolingian Empire allegedly bore witness to an early raid attempt off the coast of France. So the chronicler tells us when the Northman ships learned Charlemagne and his army had made camp near their target, they turned back and fled. They may not have inflicted any harm to the coast of France on that day, but their sudden appearance and disappearance deeply unnerved the most powerful man in Western Europe of the day. Notker further wrote:

“Charlemagne, who was a God-fearing, just and devout ruler, rose from the table and stood at the window facing East. For a long time, the precious tears poured down his face. No one dared to ask him why. In the end, he explained his lachrymose behavior to his war-like leaders. ’My faithful servants,’ said he, ‘Do you know why I wept so bitterly? I am not afraid that these ruffians will be able to do me harm, but I am sick at heart to think that even in my lifetime they have dared to attack this coast, and I am horror-stricken when I foresee what evil they will do to my descendants and their subjects.’”

Most historians question whether Charlemagne did in fact witness such an event, but the message conveyed to us by Notker is clear: the Vikings posed a real danger to the coastlines of Western Europe even before the accession of Louis the Pious. The terror they struck in the hearts of their victims paints a picture of a threat that no one in Christendom had predicted.

The first recorded attacks at Lindisfarne in 793 A.D., in Ireland in 795 A.D., and in France in 799 A.D. are widely considered the beginning events of what historians call the Viking Age. Though the Viking Age lasted for nearly three centuries, the initial raids between the years A.D. 793 and 835 occurred peripherally, meaning they remained contained to coastlines (in contrast, the second half of the 9th century was marked by invasion attempts and conquests). This is the period that is most romanticized in popular culture: longships filled with rugged bands of marauders suddenly appearing on the horizon to sack and loot monasteries for their silver. That they appeared suddenly in the historical record has launched historians, archeologists, and various fields of science on a quest to answer the question: What caused the Viking Age?

Most historians draw upon a combination of several hypotheses to explain the cause of the Viking Age. These hypotheses range in scope from territorial disputes to diplomatic tensions with neighbors, and nearly all of these factors seem to have played a part. Not unlike Europe on the eve of World War I, Scandinavia in the late 8th century appears to have been ready to boil over, and all the situation needed was a catalyst. Unfortunately, attempts to define a single catalyst or trigger event have all proved unfruitful. A 2010 paper by the archeologist James Barrett called such attempts “unrealistic” and proposed the start of the Viking Age could only be defined by combining numerous factors into a broader, more general theory.

What caused the Viking Age? The best we can say is that it was a combination of numerous factors, including climate change, trade, political strife, social stratification, among other causes. Here I will explore a few that served as likely significant contributors to what started the Viking Age.

For as long as the study of the Vikings has existed, historians have proposed a short period of climatic warming as a primary longue-durée cause of the Viking Age. Indeed, most books about Viking history will include some variation of the hypothesis. While not a catalyst for the events of the late eighth century, the warming period may have contributed to societal developments in Scandinavia that caused societal duress during the ensuing cooling period.

The long-term effects of climate, however, have come under scrutiny from several camps. A 2013 study by the historians Morgan Kelly and Cormac Ó Gráda argues too little evidence exists to correlate climate with social and political changes in the early medieval period. They acknowledge the impact climate change would have had on medieval society if it were a provable phenomenon, but stress that more research must be conducted to keep the climate hypothesis alive.

Several leading theories on what caused the Viking Age focus on the social causes born from early Scandinavia’s stratified society and warrior culture. In a 2015 paper, historian Steven Ashby proposed social capital acquired through fame and glory drove sea captains to raid abroad. In the article, he writes, “In the flexible hierarchies of the Viking Age, those who took advantage of opportunities to enhance their social capital stood to gain significantly. The lure of the raid was thus more than booty; it was about winning and preserving power through the enchantment of travel and the doing of deeds. This provides an important correction to models that focus on the need for portable wealth; the act of acquiring silver was as important as the silver itself.”

Other social traditions may have also played a significant role in encouraging young men to raid abroad. The bride price — the price paid by a man to a woman’s family for her hand in marriage — may have precipitated the desire by young men to join sea captains on raids. The treasures they brought home would have paid the bride price for the woman they wanted to marry. In a 2017 paper, historians Ben Raffield, Neil Price, and Mark Collard proposed operational sex ratios driven by polygyny and concubinage led to the need for young men to seek treasures abroad to afford the bride price and increase their chances at marrying.

In a 2016 essay, Søren M. Sindbæk suggested silver was used to establish and maintain social networks over time in Viking Age Scandinavia, bride prices being an example of such networks. If true, then the influx of Islamic silver from the East and controlled by the elites likely contributed to the need for young men to seek their own treasures in the West to compete.

In 782 A.D. Emperor Charlemagne was just wrapping up his conquest of modern-day Poland when the Saxons, under the leadership of a man named Widukind, rebelled against him. According to the Royal Frankish Annals, Charlemagne’s response was swift and bloody. During their battle near the Elbe River, the Franks took 4,500 prisoners. To teach the rebels a lesson, Charlemagne ordered the prisoners be baptized in the Elbe. The priests recited their benedictions, and the Frankish soldiers held their victims underwater until they drowned.

The event, after that dubbed “The Massacre of Verden” was no more gruesome than many of the other acts committed by the Carolingians. Forced baptisms and conversions were commonplace under Charlemagne’s rule. But Verden was different. The leader of the Saxons, Widukind, was brother-in-law to the king of the Danes, Sigfred. News of the massacre undoubtedly reached the Danish court, and as such would have (and this is conjecture) deeply angered them. It was yet another brutal, violent display of power by Charlemagne, the latest in a long series spanning decades.

Danish raids along the coast of Frisia (modern-day Netherlands) appear to have intensified almost immediately, leading to an infamous assault on the important trade port of Dorestad. The very next decade, an attack on Lindisfarne occurred, and what happened there has led some to believe that there may have been a connection between the two. A source on the attack by the twelfth century English chronicler, Simeon of Durham, who drew from a lost Northumbrian chronicle, described the events at Lindisfarne this way:

“And they came to the church at Lindisfarne, laid everything to waste with grievous plundering, trampled the holy places with polluted steps, dug up the altars and seized all the treasure of the holy church. They killed some of the brothers, took some away with them in fetters, many they drove out, naked and loaded with insults, some they drowned in the sea…“

Some have proposed the drownings symbolized the forced baptisms at Verden. The evidence, however, is inconclusive. What is undeniable is that interactions between the Danes and the Franks, and the kingdoms of the British Isles, predated the official start of the Viking Age. Political strife may have served as an important trigger.

More recent scholarship on the subject of trade has revealed less apparent causes for the start of the Viking Age. A 2018 study by Irene Baug, Dagfinn Skre, Tom Heldal, and Øystein J. Jansen examined the location and provenance of whetstones to establish probable trade ties between geographic regions across the Baltic region. Most of the whetstones analyzed originated from the settlements of Lade and Borg in what is today Northern Norway. Dating of the quarry sites and the stones reveals the whetstone trade had likely established ties between these remote regions of Scandinavia and the more urbanized southern Baltic regions, such as Ribe, as early as the beginning of the 8th century. The study authors offer further evidence of these ties by citing the discovery of a reindeer antler comb from Norway found in Ribe, Denmark that predates the presupposed timeline for the establishment of trade.

If trade between Lade and the English Channel, even if not direct, had been established in the 8th century, the resulting contact from that trade could have inspired sea captains to shift their focus from trading to raiding, as was often done when the latter proved more worthwhile. As the study authors note: “This evidence, set in the context of the contemporary surge in production and trade around the southern North Sea and English Channel, the early urbanisation in southern Scandinavia and the Baltic, and the political integration in southern and western Scandinavia, allows us to suggest immediate reasons for why Viking ship commanders turned their activities overseas in the late 700s. The evidence also sheds light on why, after the initial ‘scouting phase,’ raiding in three decades since c. 806 took place predominantly in Ireland and Scotland, and why Vikings in the mid-830s began overwintering overseas and took up raiding in England and the Frankish Empire.”

Bringing it all together: What caused the Viking Age?

No single event or trend caused the Viking Age. Why sea captains and their crews launched from Scandinavia to raid abroad has its roots in a wide breadth of social, political, environmental, and cultural trends. Much more research is needed to peel back the shroud of mystery surrounding why longships appeared so suddenly off the coasts of England, Ireland, and France in the late 8th century.

For further reading, be sure to check out my selected bibliography on Viking History.